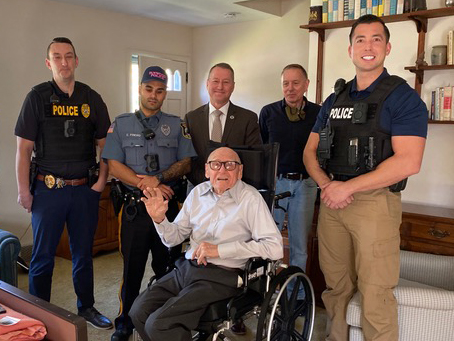 One of Fanwood’s most devoted public servants, Earl Phillips, turned 100 in late October. Earl is an original member of the Fanwood Rescue Squad, which he helped found in 1948. He spent 35 years as a Fanwood police officer, then many years as a volunteer with the Fanwood Shade Tree Commission. He is a veteran of World War II serving in the Navy from 1942 to 1945. To mark his birthday, members of the Fanwood Police Department paid him a visit and they are pictured here with him. Left to right, Lt. Dan Kranz, Officer Chris Pineiro, Police Director Mike Bramhall, Earl’s son Roger Phillips and Officer Elliot Bernard. Photo by Karen Peavey. Read more about Earl in this detailed story by Jesse Winter of the Hawk of Union County.